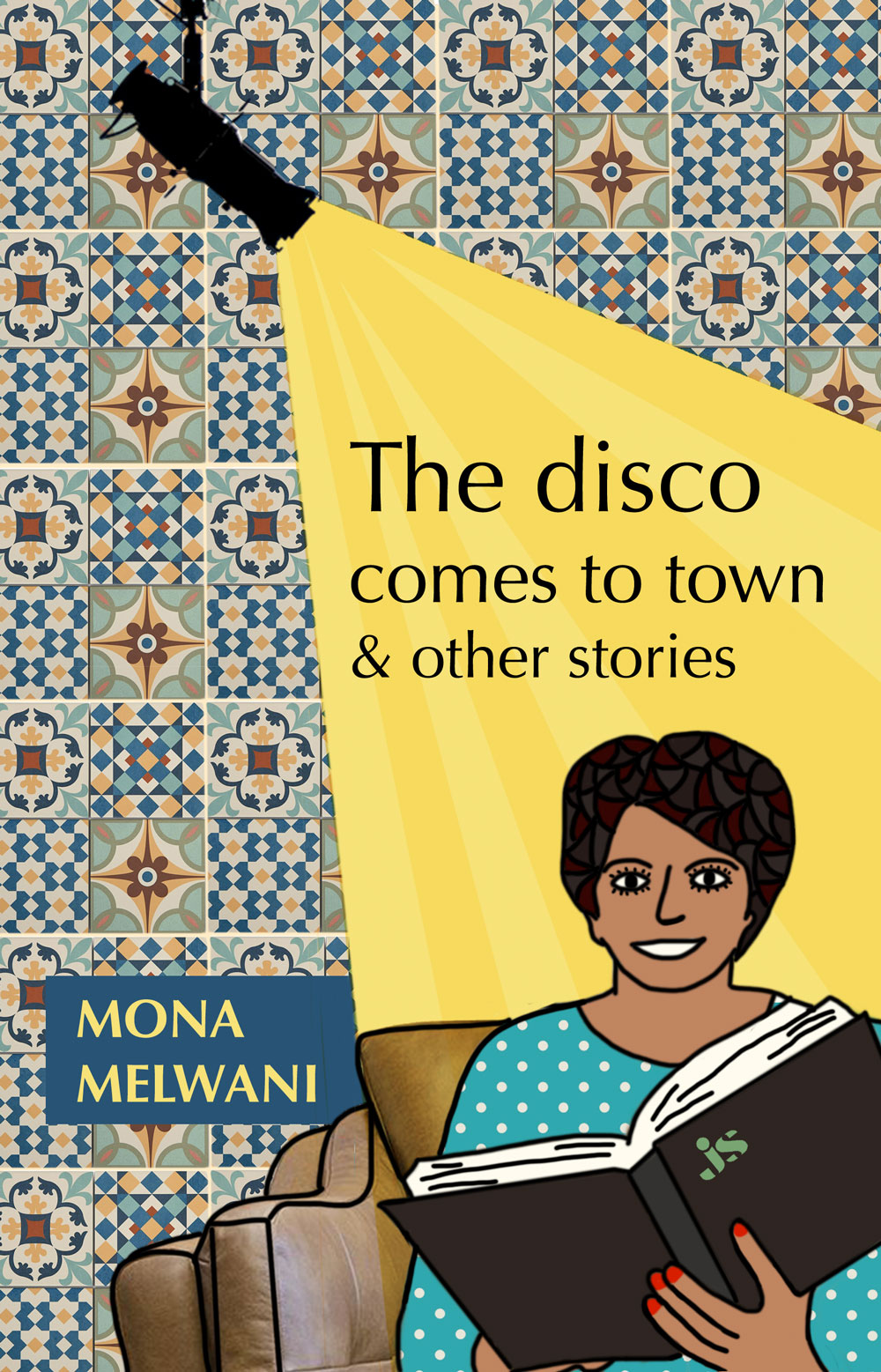 The Disco Comes to Town
& other stories

About The Disco comes to Town

This collection of short stories is a nostalgic journey back in time to the trendy 1970s. Growing to adulthood holds its challenges – whether in Shillong, or in Bombay, or in Colombo, or in Kotmale. There are coming-of-age rituals to transcend, small but joyful victories, discovering the nobility of giving, and sometimes even the lifelong consequences of unchecked impulse. Adept in the metaphor of the young, Mona Melwani spins lively tales that find their way straight into a reader’s heart.

Other publications by Mona Melwani include:
Delicious Ways With Ginger, published by India Book House, Bombay in 1976
Indian Cooking Overseas: Traditional Cuisine Survives, published by Sterling Publishers, New Delhi in 1995
Just the Right Words: 201 Report Card Comments published by Scholastic Inc., New York in 2003. The blurb to Just the Right Words states, “She was inspired to write this book so that she might help others tackle one of the most challenging aspects of teaching – writing truly successful report cards narratives.”

Mona Melwani was raised in Ceylon (now Sri Lanka). After High School, she didn’t attend college, but educated herself at The British Council Library in Colombo. She also started contributing articles to The Ceylon Observer.

After her marriage to Murli Melwani, Mona enrolled in Sankardev College, Shillong, and obtained her BA degree. She also served as the Shillong representative of The Junior Statesman, later renamed JS. In 1981, she moved with her husband, a son and a daughter to Taipei, Taiwan, where she taught at an International School, The Taipei American School, for eighteen years. While teaching, she took online classes offered by the Michigan State University and earned a Master’s Degree in Curriculum and Instruction. 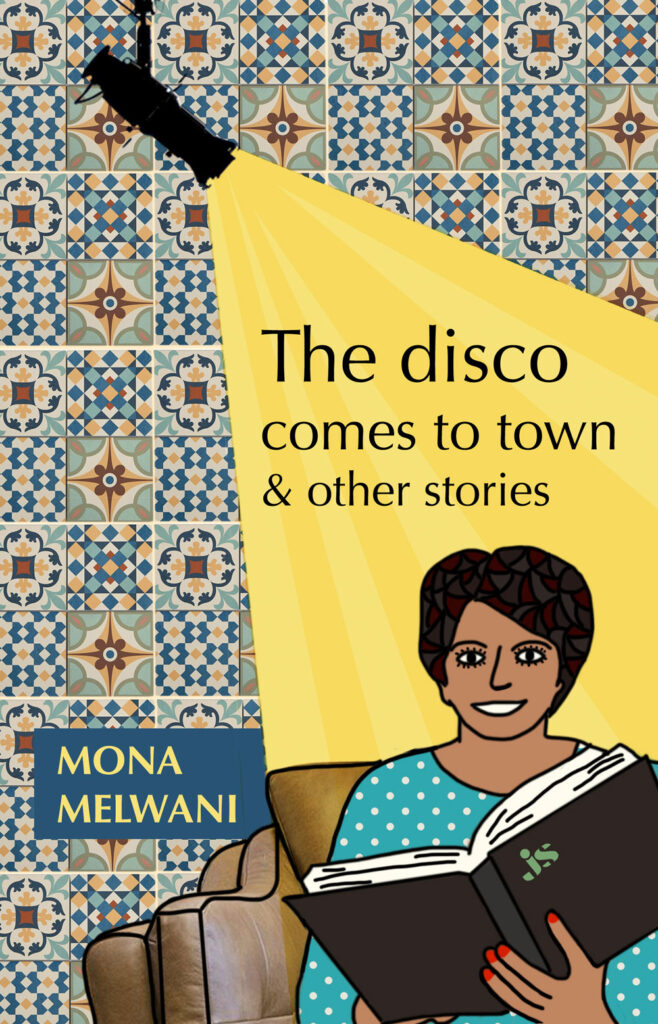 Virginia Green and the Band Boys

Virginia Green was always on the ball; she had to be, she was the correspondent for Young magazine, published in Calcutta, but a rage with young people all over India.

“We’re gonna have a discotheque,” she announced one evening and sent wave upon wave of excitement into every corner of the little hill town.

“And we’re gonna have three bands. Three top bands,” she continued the next day, “and the lights will flash pink and blue and green and the rest of the hall will be dark and the music will thump and thump and thump, while we dance.” She had a magical way of putting it, it stirred them all. One of the boys was so giggly with excitement that all he could say, between his giggles, was, “Wow! wow! . . . wow!”

“And we’re gonna pick the groups next week, there’s only a month more,” said Virginia, pulling out the rubber band from her hair and letting the long black hair drape her face like a stage curtain.

The town was little but it lived mostly on the food of music (and love) and there were twelve musical groups to choose from. Virginia had it tough picking out just three. There was no question about Yorkshire Pudding, it was the ‘in’ group. Their music was refined in a pop sort of way and folks digged it. Then there were the Harakiris, whose music was suicidal, but the sheer violence and vigour with which the four boys, Rancoure, Byter, Frust and Homysyde played, got the kids on the floor to forget their inhibitions – those who had any, that is.

When it came to choosing the third band, Virginia was in a fix. The Gears, comprising four brothers. First Gear, Second Gear, Third Gear and Reverse Gear (their father owned a garage), were so young and enthusiastic that they deserved every encouragement; that was the motto of Young magazine too. So, although Sunday September was a soft pal of Virginia’s, and although they played better than The Gears, Virginia engaged The Gears.

Large red posters went up on the street walls everywhere, right over the hand-painted Stick No Bills signs. One poster looked magnificent next to the poster of the forthcoming movie, ‘Jangal Me Mangal’ and another drew second glances, posted as it was next to THINK ‘before you have another child.’ Covered by the disco poster, it actually read “‘THINK’ Young brings you a Disco Nite for the first time at the Watermain’s Hotel on 4th December. Tickets at … and … NIRODH.” No one knew why the brand name of the condom, promoted by the Indian government’s family-planning campaign, was not covered.

When a large red banner went up at the entrance to Police Bazaar announcing the Disco Nite, excitement snowballed.

You couldn’t meet Virginia Green even by appointment in those days. If you gave her a tinkle, she’d pick up the receiver and say breathlessly, “I’ve still got to get tax exemption and rent the chairs,” or “Sorry, wrong number.”

On the few familiar streets of the little town, Virginia was always recognizable a mile away, but now you couldn’t mistake her even two miles away. You see, she had stopped walking; now she skipped a little, ran a little, and as the town had dumps of garbage strewn at regular intervals, she did a hurdle-jump. If you crossed her on the street she wouldn’t stop for a ‘hi!’, instead, she would, (continuing with her skipping, running and dump-jumping) say breathlessly, “I’m going to the Watermain’s Dance Hall, we’re going to decorate it tomorrow,” or “Only four days more!”

It wasn’t considered unusual really. Excitement had spread like the flu and everybody in the town was skipping and running and (where the garbage dumps came) leap-frogging on the backs of their friends.

Three of the town’s ten Chinese restaurants burned the midnight oil. The Harakiris practiced at The Chow Mein, The Yorkshire Pudding at the Chinese Dumpling, and The Gears operated at The Momo. All day they banged and strummed and wailed and when night came they went on and on, their heads lolling as if linked to the strings of their guitars, their eyes glazed and half-closed. It was difficult to say, one, whether it was because of the need for sleep, two, the hypnotizing beat of their music or, three, the white powder that made them all look so high.

Sometimes, all three groups met at The Maharaj, which was the cheapest Irani restaurant in town. The day before the disco night, they sat there, all agog, every one of them talking and no one listening, almost like their music, till the subject came up.

“I don’t mind playing for nothing,” said First Gear who had every reason not to mind, but the Harakiris, as their names indicated, considered themselves to be the ‘chosen’ ones and felt otherwise.

“It’s not fair, Virgin’s paying only seventy-five bucks for each group,” said Byter.

“I guess we’re worth much more and Virgin should shell out,” said Rodney Pai of The Yorkshire Pudding.

“You could back out!” Watson Holmes of The Yorkshire Pudding told him in a cool collected voice.

“Tell her seventy-five is not enough for the taxi fare even,” said Frust.

“We’ll tell her we won’t play otherwise. She’d be hung up,” chuckled Holmes.

“Think of the publicity, fellas, you wouldn’t get all that even if you paid for it,” said Homysyde.

“But we’re playing, man, we’ll be playing our guts out!” said Byter angrily.

“We’ll all go tomorrow, she’ll have to give in, she’s got no choice,” said Third Gear.

“Send your rep then,” the boys demanded and Holmes waved his hand at Tennessee Trent, their sleepy-eyed vocalist, to join the boys tomorrow.

They stood at the top of the street waiting for Tennessee, but half an hour later they gave up.

“Excited, boys!” said Virginia, “The big day’s tomorrow,” she added as she led the delegation in. She was five-feet-six, she wore a short leather wrap around her waist, and there was more leg than skirt on her. The boys didn’t say anything.