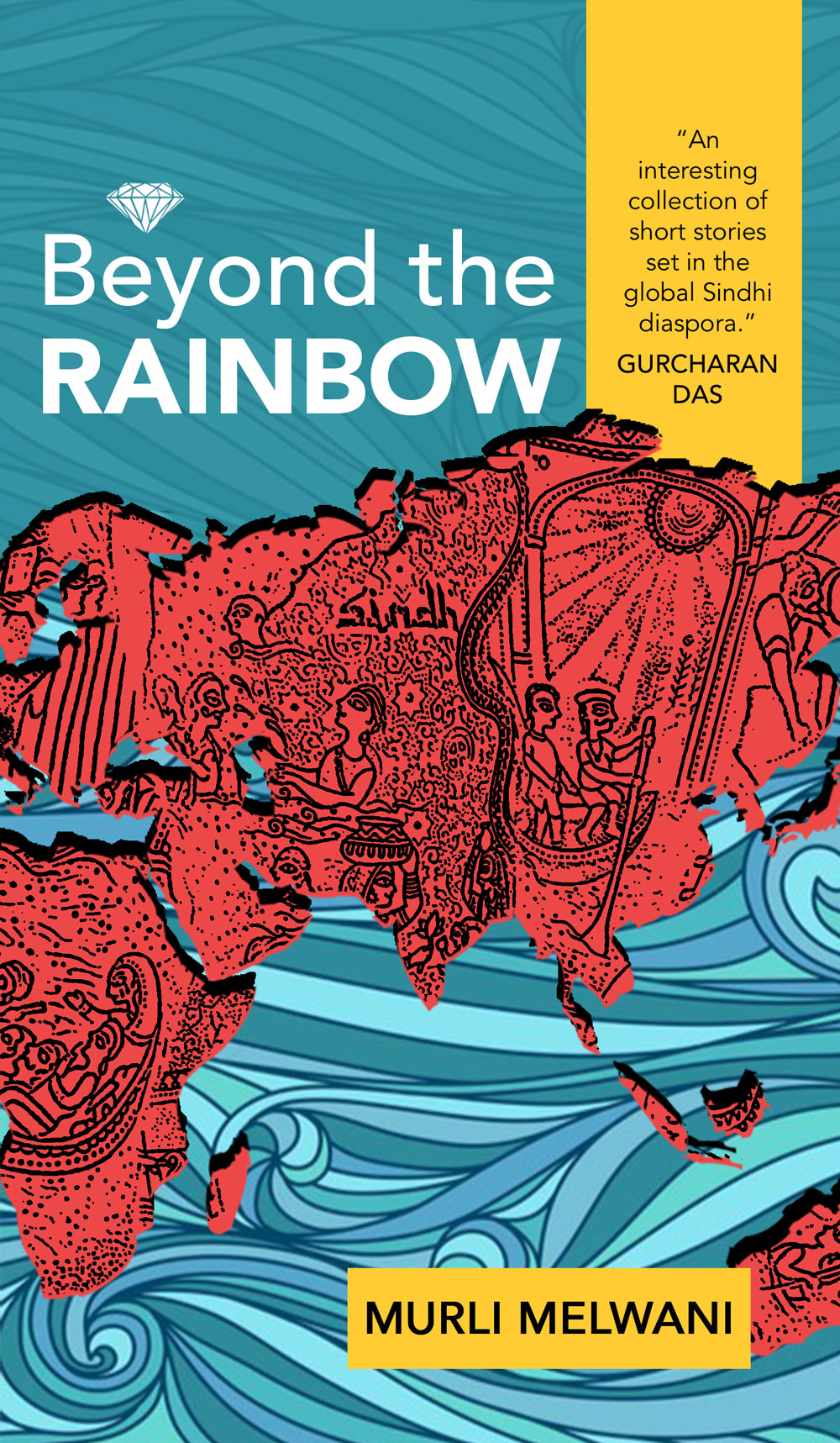 Buy now
Read an excerpt
Murli is not just an observer of humans and their situation, not just a weaver of tales. He is a skilled businessman too and his stories give us practical never-fail tips on selling, exposure to business cycles, and the understanding that large investments, even the most obvious, could turn out to be ruinous.
Saaz AggarwalHindustan Times

About Beyond the Rainbow

Resh speaks Papiamentu fluently; also Dutch and English. But no Sindhi.
Hassaram, successful in business, deeply respected in his expat community on the US-Mexico border, won’t stop at even the most heinous of crimes to preserve his image.
Metha, who makes his fortune in Hong Kong, loses it all and has no qualms about starting all over, has changed his name to Mike, but will not allow his wife to call him anything but ‘Heydaan’.
Little Shiv, stubborn and carefree as only an adored little boy can be, matures as the task of tending shoes at the gurudwara gives him an insight into the lives of the worshippers.
Meet them, and a number of other colourful characters who live and work in different countries around the world. All are Sindhis, displaced from their ancestral homeland by the partition of India in 1947. Being enterprising, hardworking and financially successful, this ethnic community is largely perceived through shallow caricatures.
Murli Melwani’s stories take the reader into the lives of real people, showcasing intricacies of thought and feeling, exploring the impact of loss of culture and identity alongside the tremendous achievement of life as global citizens who speak local languages and are immersed in communities in countries around the world. This book is not just an exceptional work of fiction with strong characters, gripping plots, and an unwavering vein of humour, it also incorporates a range of sociological and anthropological insights. In addition, the book unwittingly also forms a practical manual of insights into how Sindhis do business. A skilled businessman himself, Murli Melwani’s stories provide practical never-fail tips on selling, exposure to business cycles, and the understanding that large investments, even the most obvious, could turn out to be ruinous.

In 1947, India was partitioned, and Pakistan was formed on the basis of religion. The Hindu Sindhis, rendered homeless by this act, scattered and settled in different places where they established themselves as an enterprising and hardworking people and became financially successful in a surprisingly short period. Behind this façade, the history of this ethnic community was obscured and has only recently begun to be investigated, and many fascinating facts have emerged.

Murli Melwani was a professor of English Literature until circumstances led him to become a businessman in middle age. In this collection of beautifully written and gripping short stories, he depicts various aspects of his community. He says, “We are viewed as shallow for our ability to suppress negative thoughts, devote unbounded energy to business and live a flashy lifestyle. Being individualistic and opinionated by nature, and because we have not shown a cohesive and attractive face to the world, Hindu Sindhis are seen as stereotypes. With these stories, I have endeavoured to show that we have lives as individuals too.” Murli Melwani is a Sindhi businessman who lived in Taiwan for twenty-five years, during which time he travelled to a number of countries around the world to book orders for his export company.

An ex-professor of English Literature at Sankerdev College, Shillong, Murli Melwani has a PhD in English Literature, and is the author of two collections of short stories, two of literary criticism and a play, which have been well received by critics. He also runs a website that serves as an archival database for collections of short stories written in English by Indians.

Now semi-retired from business, Murli Melwani lives with his wife Mona in Foster City, USA, where he continues to write, and tries to stay in close touch with his family and friends near or far.

Praise for Beyond the Rainbow

An interesting collection of short stories set in the global Sindhi diaspora.

Murli is not just an observer of humans and their situation, not just a weaver of tales. He is a skilled businessman too and his stories give us practical never-fail tips on selling, exposure to business cycles, and the understanding that large investments, even the most obvious, could turn out to be ruinous.

Murli Melwani’s collection of short stories is a melange of colourful people, exotic locales and some adventure. All characters and events are supposedly fictional. But I suspect, very strongly, each story is true or at least has a broad element of truth.

excerpt from the short story

Water on a hotplate

“Let me go in and ask where Newton’s is,” I said. Anand pulled into a parking space in front of it. I noticed two signs on the glass door, one above the other: “Set lunch $3.99,” “Halal meat served.”

A middle-aged Chinese lady sat behind the counter. “Do you know where Newton’s is?” I asked her in Mandarin. I haven’t the faintest idea why I broke into Mandarin. Even as I was talking to her, I wondered whether it was some instinctive urge to speak what for me had become a third language, a tribute to a place that gave me the means to join an expensive country club and earn the respect of the warm and welcoming Taiwanese? No wonder I called Taiwan my second home.

She answered in Mandarin. “I don’t know. We are new here.”

“Let’s go to one of the Chinese restaurants we saw on Ellesmere,” I said as I got into the car.

As we were about to swing out of the mall, Rajni, ever the observant one, exclaimed, “Hey, look, it says, Indian Chinese food!” These words were on the glass panel of “The Wok” on the side facing Ellesmere Road.

“It should have struck me when I saw ‘Halal Meat served’ on the other door. Should have known the place had something to do with South Asian food,” I said, knocking the side of my head with my knuckles.

Anand made a U-turn and swung back into the parking lot. The woman at the counter did not show any surprise at seeing me with others in tow.

“You could have told me that you serve Indian Chinese food,” I told her as she laid our table.

“I didn’t know that is what you wanted. You asked for Newton’s,” she replied in English, which had a strong Indian accent.

“Which part of India do you come from?” Rajni asked her.

“Can you speak Hindi?”

“Why won’t I be able to speak Hindi? I was born there. I grew up in India,” she replied in Hindi.

For the first time I became aware of the soft piped music in the background: it was popular Hindi movie music.

While Resh and Anand studied the menu, Rajni and I learnt that her name was May Lin, that her husband had started “The Wok” in Mumbai, and that later he had opened a…