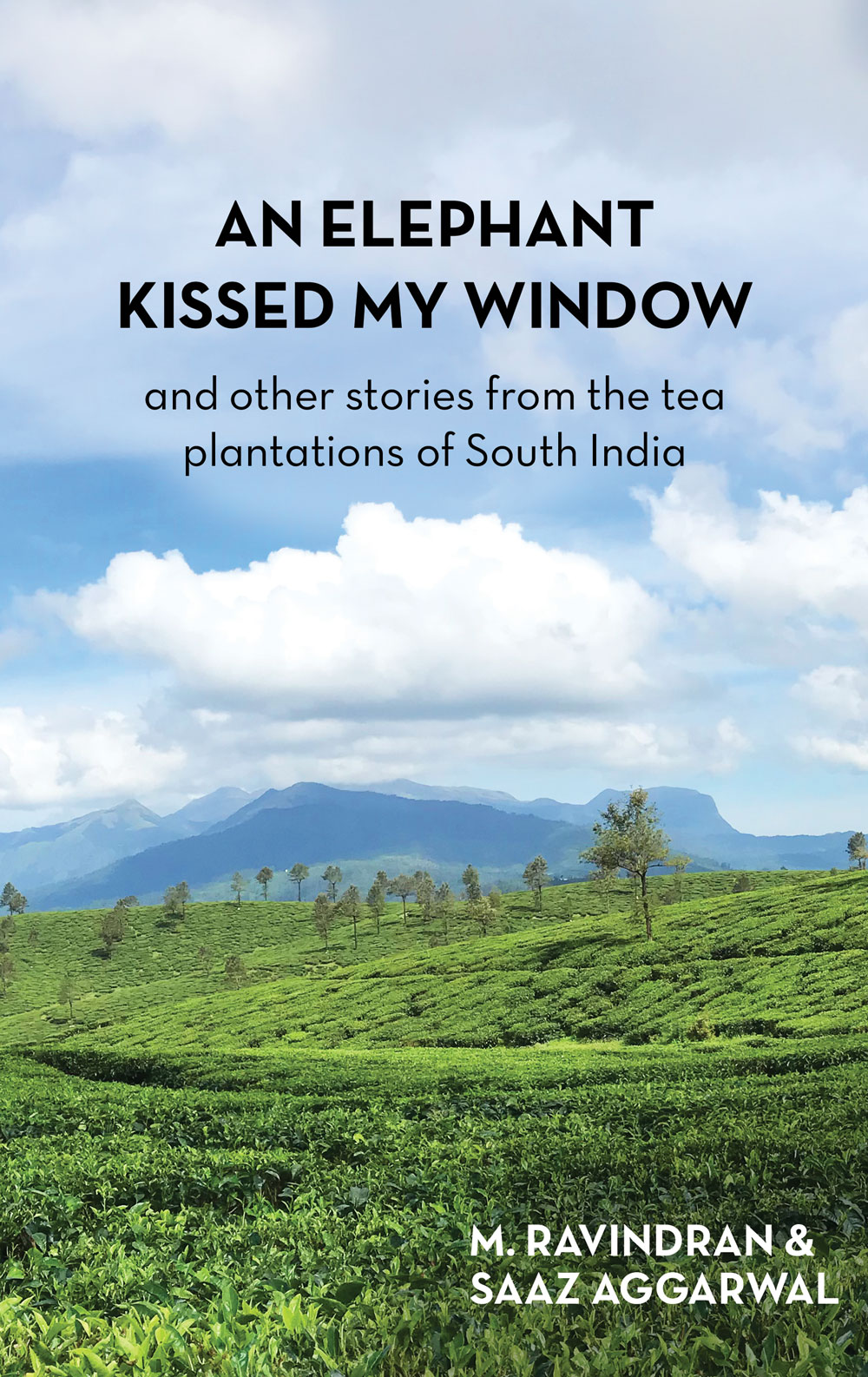 & other stories from the tea plantations of south india

Buy now
Read an excerpt
The authors need a round of applause for this volume. The aroma of the strong-bodied South Indian teas wafts around long after the last chapter has been read.
Indrani DuttaThe Hindu

About An elephant kissed my window

This collection of stories from the tea plantations of South India is a fascinating journey back to a forgotten era. Colonial rule has ended, and the British have left behind a nation of tea producers and tea drinkers. Charming anecdotes from the transitional period are presented showcasing archaic rituals alongside the pranks of the high-spirited young men privileged to have inherited them.

This book takes you deep into pristine jungles where you will meet chevrotain, hornbills and panthers; and rural areas where people catch snakes, perform ‘black magic’, and identify thieves using fascinating traditional methods.

Read here about the Plantation Bag, which brought the latest events and fashions from ‘home’ – arriving three months after it was dispatched because that’s how long it took for things to arrive from London. There are also first-person accounts of the fire-walking and other spectacular religious ceremonies; the ceremonial Hunt at the redoubtable Ooty Club (where snooker was ‘invented’); the slow march of technology during this time – and much more.

The challenge faced by the Indian managers, who stepped into positions of power over a labour force of their own race. It was a delicate balance they trod, as the disparity between their homes and lifestyles and those of the labour was remarkable. While protecting their own interests, the new managers had to ensure that the plantations remained profitable, and also to honour the Industrial Disputes Act, 1947, the Factories Act, 1948, and the Plantation Labour Act, 1951.

Sometimes politically incorrect, sometimes verging on controversy, always thought provoking – who would ever imagine that all this could possibly go into the making of that staple of our daily lives, a simple cup of tea?

M. Ravindran was a tea planter in South India for more than thirty years, and a former Group Manager, Tea Estates India.

Saaz Aggarwal is a writer, biographer and painter, recognized for her work in curating and archiving oral histories.

Photos from the book

Life on Prospect Estate
50 years ago!

Praise for An Elephant Kissed My Window

The authors need a round of applause for this volume. The aroma of the strong-bodied South Indian teas wafts around long after the last chapter has been read. 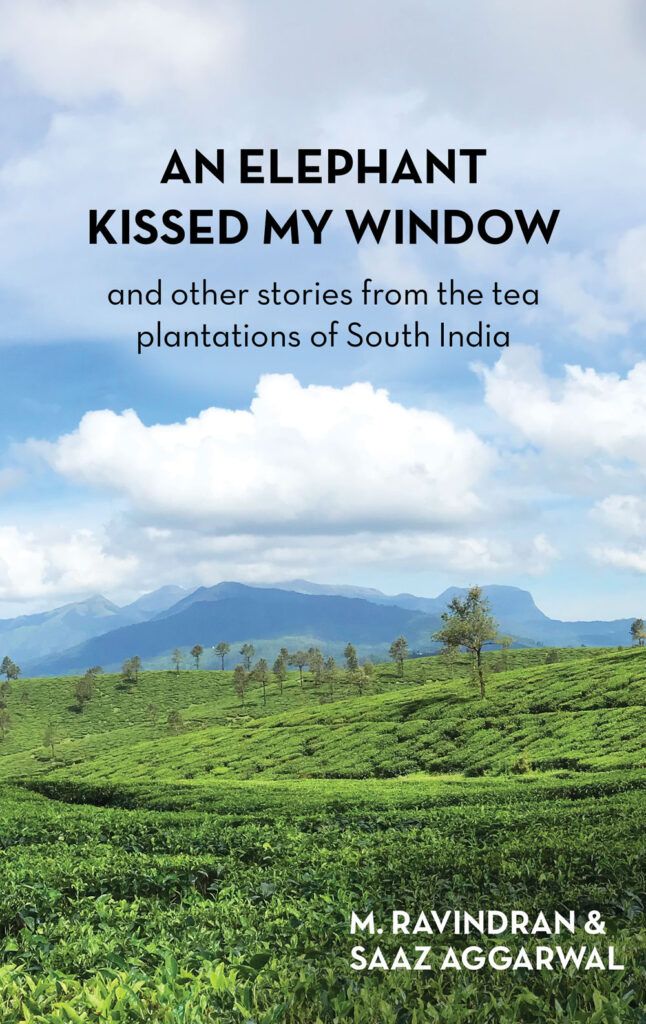 and other stories from the tea plantations of south india

It was bitterly cold that morning, and a thin layer of frost covered the earth. I got out of my new Standard Herald car at TR Bazaar, and walked with Thimma down to the temple, where he ran to join his parents, quickly spotting his mother in the crowd.

The firewalkers were ready. They had spent the last forty days preparing themselves, fasting and praying in a state of purity. Each day, after completing their work on the estate, they had met at the temple and chanted prayers together under the direction of the priest. Frugal meals were brought from their homes to the temple, where they ate together. At night, they slept on its veranda, a strongly-bonded team whose closeness shielded them from temptation towards any immoral activity.

As they stepped onto the bed of burning coals, loud cheers rose from the crowd. While some ran across, taking just a few long strides, others ambled, ankle-deep in burning coals. We watched, entranced, and I was horrified to see Thimma break away from his mother’s hold and run to join them. She screamed in horror, raising her hands to her face as he stepped on to the bed of hot coals and ran determinedly across it, reaching the end just as successfully as the others.

To my eyes, Thimma had achieved a miracle, but for his parents and the other workers, and particularly for the priest, temple committee and the elders who guard the festival tradition, he had committed an atrocity. The child had leapt onto the consecrated fire without any of the essential ritual purifications. He would later explain that he had seen someone standing at the other end of the bed of fire, beckoning to him to join the firewalkers and, though he knew better, the summons had filled him with urgency he was unable to resist. Much did his mother plead that Thimma had been blessed with a vision; he was soundly thrashed anyway by the temple elders. Surely it was important to set an example to anyone else who might try to gate-crash the sacred ritual.

Most participants complete the ritual safely, but it is an inherently risky ritual and sometimes there are accidents. I was watching once when a young man lost control of himself, pushed at the people in front of him and fell down on his side. His entire leg turned white – a sight I cannot forget. He had disgraced not just himself but his family and community too. Not only that, he had disrupted the ceremony, and this was believed to have endangered everyone present, putting them at the mercy of the goddess. For this, he was hauled straight to the temple and thrashed. Holy water was sprinkled on the wound. He would later have been taken to hospital and, as far as I remember, there was no announcement that he had passed away so he must have survived (by the blessings of the deity).

Over the years, no matter how many times I viewed the firewalking ceremony, it never lost its impact as a morning of mysticism, devotion, and awe; a tremendous superhuman feat. I remember the excitement among the labour force as the event approached, in my first year on Prospect. It was December 1967, I was twenty years old, and had recently joined the estate as Trainee Assistant Manager.

The labour force was constantly buzzing with plans and activities. The maistry – supervisor – Puttusamy glowed with praise for the workers of his village, Kollegal, who had signed up for this year’s Kondam. He told me repeatedly about the powers of Mariamman, the temple deity evoked in this ritual, its purity, and the miracles he had seen over the decades he had seen it being performed. I was fascinated.

Puttusamy himself would have come to work on the tea plantations as a boy. Perhaps he had…